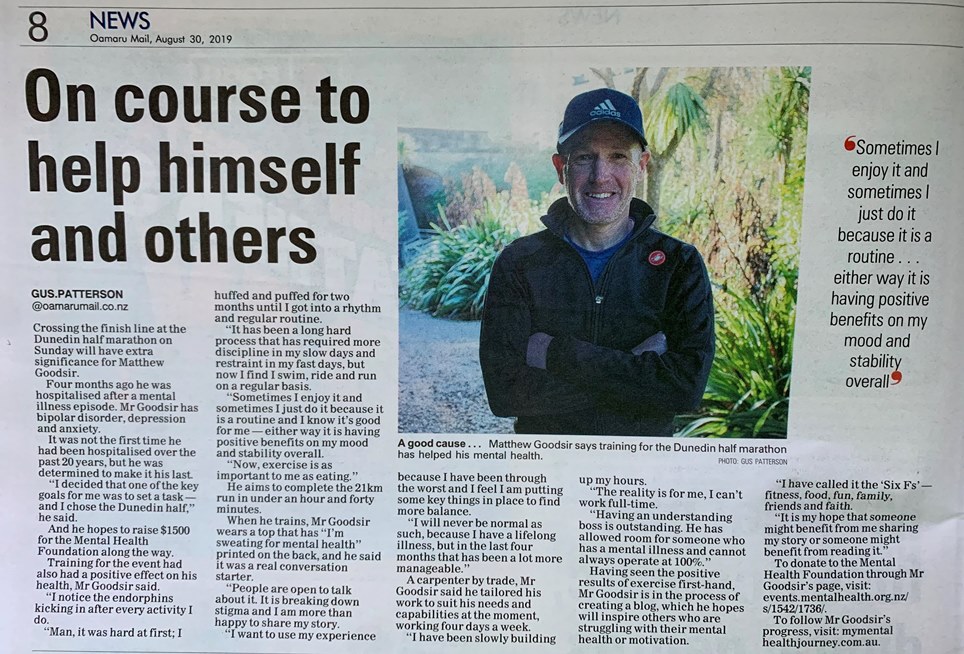 Crossing the finish line at the Dunedin half-marathon on Sunday will have extra significance for Matthew Goodsir.

Four months ago he was hospitalised after a mental illness episode, he suffers from bipolar disorder, major depression and generalised anxiety.

It was not the first time he had been hospitalised over the last 20 years since he was first diagnosed, but he was determined to make it his last.

Prior to his most recent trip to hospital was a particularly tough time for Mr Goodsir, he moved back to his hometown of Oamaru from Melbourne, leaving behind his family as he battled with a major bout of depression.

“I decided that one of the key goals for me was to set a task, and I chose the Dunedin half.”

Training for the event had also had a positive effect on his health, Mr Goodsir said.

“I notice the endorphins kicking in after every activity I do”.

“Man it was hard at first, I huffed and puffed for two months until I got into a rhythm and regular routine”.

“It has been a long hard process that has required more discipline in my slow days and restraint in my fast days, but now I find I swim, ride and run on a regular basis”.

“Sometimes I enjoy it and sometimes I just do it because it is a routine and I know it’s good for me, either way it is having positive benefits on my mood and stability overall”.

“Now exercise is as important to me as eating”.

He aims to complete the 21km run in under an hour and forty minutes. 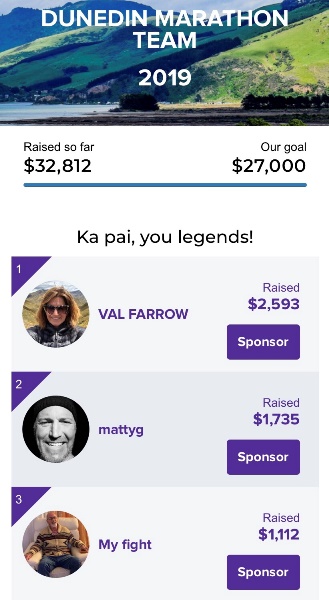 When he trains, Mr Goodsir wears a top that has “I’m sweating for mental health” printed on the back, and he was amazed by how much of a conversation starter it proved to be.

“People are open to talk about it, it is breaking down stigma and I am more than happy to share my story”.

“I want to use my experience because I have been through the worst and I feel I am putting some key things in place to find more balance.”

“I will never be normal as such because I have a life-long illness, but in the last four months that has been a lot more manageable.”

A carpenter by trade, Mr Goodsir said he tailored his work to suit his needs and capabilities at the moment, working four days a week.

“I have been slowly building up my hours.”

“The reality is for me, I can’t work full time, having an understanding boss is outstanding.”

“He has allowed room for someone who has a mental illness and can not always operate at 100%.“

Having seen the positive results of exercise first-hand, Mr Goodsir is the process of creating a blog which he hopes will inspire others who are struggling with their mental health or motivation.

“It is my hope that someone might benefit from me sharing my story of the benefits of fitness enhancing your mental health”.

He hopes to raise $1500 for the Mental Health Foundation.

To read his post race day blog visit: Running the Dunedin 1/2 marathon in a hypomania phase